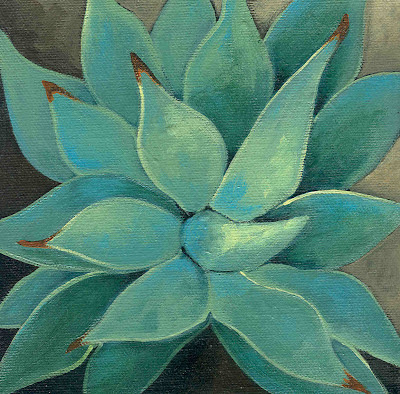 Here's a little 6 x 6 inch canvas I painted this weekend at the studio especially for Cactus Monday. I used a photo I took a few years ago as a reference. I've listed it in my Etsy shop to keep the other paintings company! I call it "Cactus Meditation."
Update...it sold as soon as I listed it. A client of mine saw it and wanted it for her daughter, so I took it off Etsy.
Posted by studio lolo at 7:20 AM 11 comments:

IF : Homage To A Tree 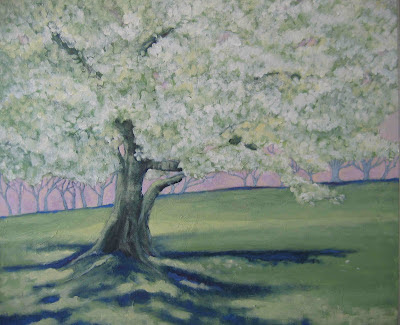 "Each time these blossoms open I recall the friend who gave me the saplings, and the times we used to stop and drink beneath his trees;
But those springs of twenty years ago are like a dream,
And the wine cups of those days are tea-bowls now."
~Kisei Reigen~

If you have sound, please listen to "Dream Tree" as it plays, and then "Magnolia" if you have time to linger.
Acrylic on canvas 36" x 36" for Illustration Friday prompt : Homage
(The cropping cut off the bottom shadowing a bit)
Posted by studio lolo at 4:09 PM 39 comments: 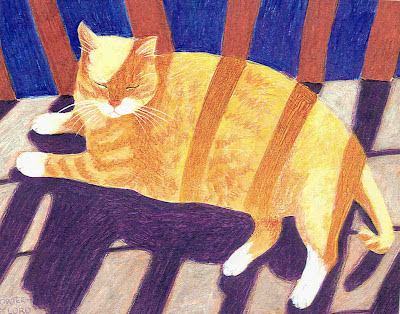 This is a drawing I did of Biff, one of the cats we drove out to California with. He loved the sun! (But what kitty doesn't?) We had him for nearly 17 years. Not long enough in my opinion. He was a huge bundle of love and gratitude. He surely would have died had I not taken him from his previous owner, the dairy farmer next door. Biff was starving and was suffering from malnutrition and pneumonia, weighing a mere 5 pounds at the age of a year. It's a wonder he lived that long before my intervention/catnapping. Some farmers think you shouldn't feed cats because they'll be better mousers if they're hungry. Sheer ignorance.
Anyway, Biff enjoyed another 16 years with us just soaking up the sun and eating good food. He was a great, great friend.

Everyone is welcome to participate! 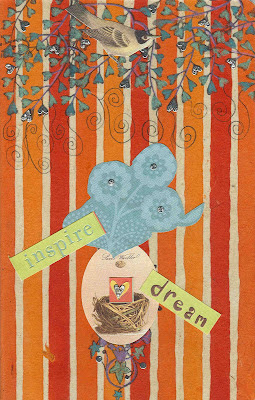 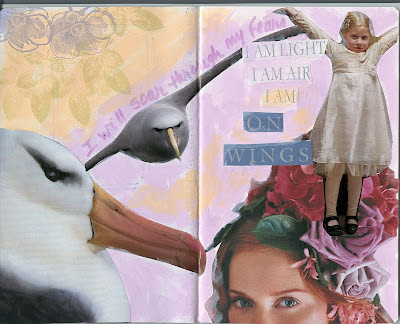 Years ago I met a lady through the mail when I joined a postcard group that she started. We really hit it off and are still friends today, many years later. She has a journaling blog and I keep promising her I'm going to start one. I finally had the idea that we should each buy one, do an entry and send them to each other for the next entry. At the end we'll have 2 journals that we've collaborated on and we'll each have a nice keepsake!
Here's the journal I started. The cover was just the stripes and I added the design. And here's my first entry, a two page spread. Now it's winging its way to New Jersey from California for Em's entry which I know will be fantastic! I'll post them all as they are created. Thanks for looking and sharing our journey!
Posted by studio lolo at 9:37 AM 5 comments: 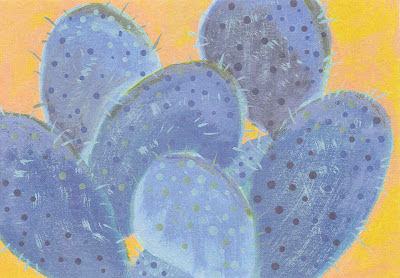 Well, I said I'd try to participate in Cactus Monday with Forever Young, Teri and Margaret, so here's my first entry. I used to send out designs to greeting card companies a long time ago. This is one I dug out of my archives. I've sold the original, so this is a scan of a crappy color copy. The original was more vibrant. I call it "Blue Cactus." i know....genius title!
Posted by studio lolo at 9:47 AM 7 comments:

I didn't know how to go about illustrating my list of pet peeves, so I decided to come up with a cartoon idea for one of them that the local newspaper is running a contest for and kill two birds with one stone.
My husband has become completely addicted to the TIVO like capabilities of our new TV. He records everything just so he can fast forward through all of the commercials. If there's a particular moment he likes, he'll rewind it and replay it a hundred times. If the remote control seemed glued to his hand in the past, the newer version has officially been grafted to his right palm. It would take a skilled surgeon and the threat of divorce to separate the two.

I actually have several pet peeves. Here are just a few more not represented in pictures.

I can't stand it when people don't use their turn signals. My crystal ball is dirty, so I have no clue where you're going when you stop in the middle of the road. Also, if you see me waiting on the corner to see what you're going to do, please let me know instead of making me linger there another half hour.

Gum snapping! Please stop it right now. Nobody wants to hear you chew gum like a cow. Do it in the privacy of your own trailer. (My apologies to trailer dwellers with manners.)

People who carry their pets and never let their feet touch the ground. Where's the logic in that? Oh, I think I'll carry Foo-Foo everywhere so she won't have to use her legs and then her muscles can atrophy and her bones can weaken and she can get early arthritis. Yay!

And a few more without going on and on...snobs, people who judge, people who care about your "pedigree', pah-leeeze! People who don't let their pets in the house, and people who won't let you off the phone until you snap at them after politely telling them 10 times you have to get going.

Other than those few things, I just let stuff roll right off my back!
(For Illustration Friday's prompt : Pet Peeves) 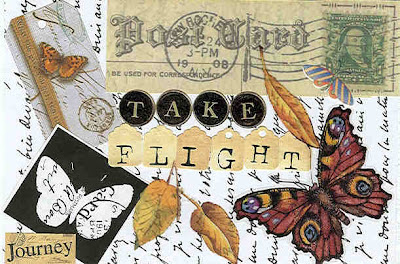 I was invited by my super friend Forever Young to come up with a six word memoir. That's a tall order! Here are the rules...

1) Write a six word memoir and post it on your blog. Feel free to add an image.

2) Link your post to the person who tagged you.

4) Comment on the tagged blogs and invite them to participate...no pressure :)

This was a hard one for me. How can you come up with a memoir in six words?

Here's the best I could do!

Play only if the spirit moves you! 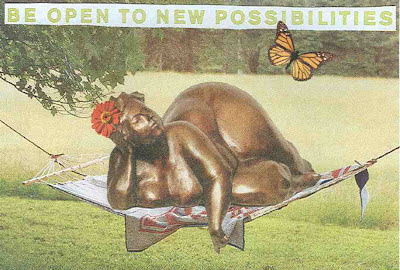 Sometimes the smallest things can weigh heavy on our minds. If we were to take baby steps in solving our problems, we would get where we need to go without being overwhelmed by the task at hand. Keep an open mind and be open to new possibilities. Release the idea that you "can't" do something and then chip away at it bit by bit by bit. The heaviness of the situation will just fall away and become a distant memory.
Please see my moleskine entry here.

collage from magazines and digital embellishments. For Illustration Friday: Heavy
Posted by studio lolo at 11:35 AM 40 comments:

I Love Getting Mail ! 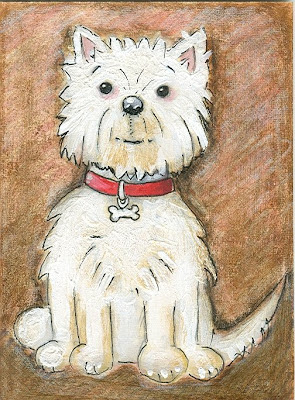 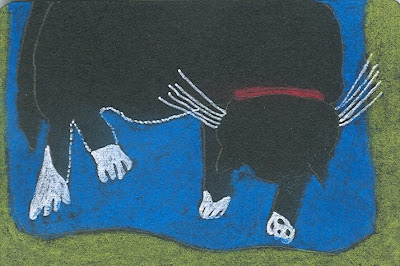 Look at what I got in the mail from 2 wonderful ladies I met through Illustration Friday! I'll bet everyone who comes here knows them. The first ATC is from the incredible Kim Coles from "I'm With Sully" fame. I feel like she's become my little sister :) And look...it's Sully! My dog has a HUGE crush on him. How adorable is he?! Thanks Kim, I love him!

The other wonderful ATC is from one of the sweetest ladies on the blogsphere, Tammy from "The Heartful Blogger." I don't think she had any idea how much I love love love black & white tuxedo kitties. What a wonderful surprise! I love the spreading toes as he snoozes the day away. What a great card! Thanks Tammy, you made my day :) And here she is, newly pregnant and surprising me with a gift out of the blue. I'll be sending something for the baby as soon as I know what she's having ;)

It's the little things in life that make a huge difference. Thanks, ladies, for making my experience here a joy!
Posted by studio lolo at 5:06 PM 8 comments: 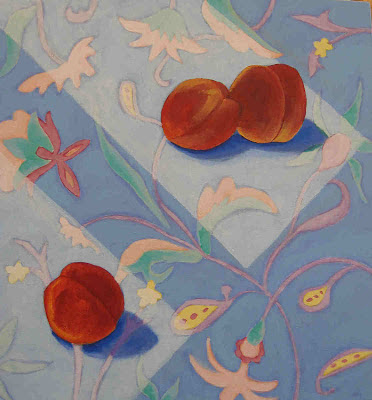 One of my addictions is patterns. I love painting them, buying them on linens and paper supplies and decorating with them. I mix and match the most unlikely ones together. As long as there's some color harmony going on, it works for me. I find patterns to be cheery. I've recovered my dining room chairs in vibrant garden motifs with linen napkins from import stores. This is a painting I did of one of my favorite tablecloths that I bought at a flea market, only in real life it's in reds and oranges. I wanted the contrast of the blues with these vibrant nectarines, which by the way, were delicious and juicy! Many artists are often inspired by gardens. Botanical illustration has been around forever, and just look at how many nature journals are out there.
Gardens are magical, healing places whether it's a small one on your kitchen windowsill, a plot of grass on your rooftop, or vast acreage filled with wildflowers and fruit trees. It's all good! So do yourself a favor and spend more time in the garden.