Domino had little or no tolerance for fakes and phoneys.
(click to embiggen)
(A rapid-fire sketch on a paper bag using micron pen and colored pencils)
For more entries, click here!
Posted by studio lolo at 11:27 AM 37 comments: 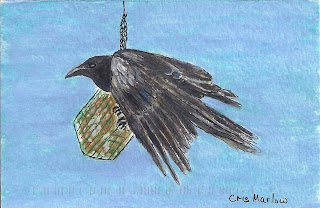 I can't believe how late I am in posting these wonderful gifts from the past few weeks. Forgive me!
This postcard was painted by Cris in Oregon and it arrived as a total surprise to me!
Most of you know that I'm a raving raven fanatic and I often feature them in my work. To receive one as a gift really touches me.
Thank you Cris. I love him!! 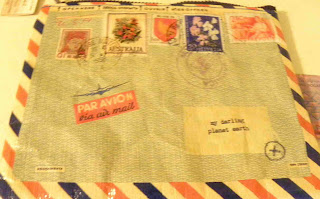 I'm afraid these next 2 photos are a bit blurry and yellow. I apologize. The lighting in here is bad sometimes and even worse with a flash!
Marianne sent this vinyl pouch made from recycled materials with pictures of world stamps. The envelope comes pre-addressed to "My Darling Planet Earth."
Imagine my surprise when I opened it to find 2 wonderful notecards and my gorgeous 'yoga' atc from our exchange, but also... 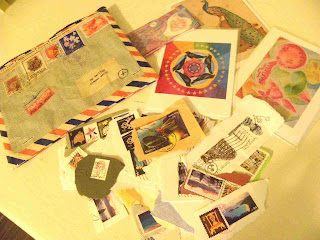 ...the stamps she has been collecting from her mail from all over the world! She knows I use them in my collages so she sent them to me. How sweet! And there's also some money from Hong Kong in case I want to go shopping there ;)
Some of these stamps are unbelievable, like that huge one on top from Malaysia!
Thank you M...you spoil me rotten!!♥ 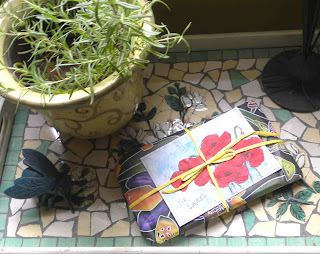 And finally we have this beautiful package from Caroline in Malaysia.
Here is a close-up of the hand painted envelope...so pretty!! 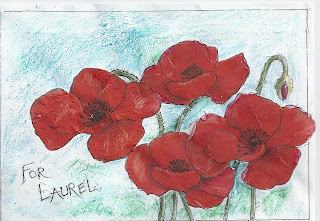 We all know Caroline loves red poppies! I think these may be from some paper napkins I sent her, collaged on and then embellished. 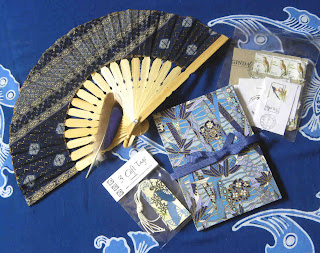 And look at all this stuff!! A beautiful fabric fan, so much appreciated in this heat and humidity!!
She also sent me one of her lovely hand made sketchbooks which I plan to do something special in to share at a later date.
And there are some tiny gift tags to match the Asian theme and LOOK!!! She had the same idea and sent me postage stamps too. These are all birds. (I see a bird theme coming up in the sketchbook.) And this stunning feather~the irridescence is unbelievable. I tried to capture it but I failed.
She doesn't remember what or where the feather came from~possibly England, possibly a duck!!
What beautiful, thoughtful gifts from three special ladies.
Please be sure to visit them to see more of their work.
Thank you, my friends. ♥ I'm a lucky girl!
Posted by studio lolo at 7:44 AM 15 comments: 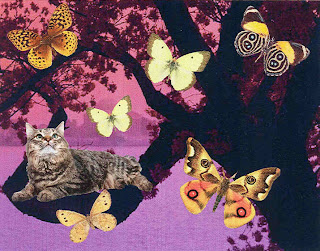 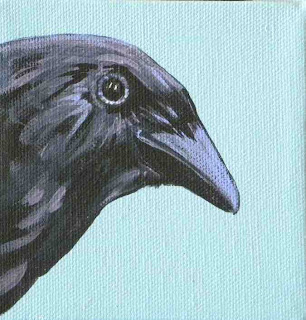 Well, after a long dry spell in my first year back in Rhode Island I am thrilled to say I finally have a little income trickling in thanks to friends and art commissions.
KJ's partner JB commissioned the raven above and the gorilla below to go with this owl (top one) KJ bought her. JB thought the owl needed the company of these two!
I just did the gorilla last night so JB hasn't seen it yet~thank goodness she doesn't blog!! She named the raven, Joe. I wonder how the gorilla will present itself, male or female. I'm feeling female energy here when I look in her eyes.  Both paintings are only 4"x4". 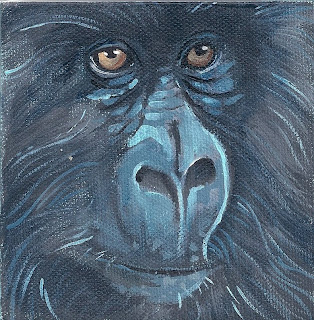 I have another commission to start now from Anne over at el Milagro Studio!
(Bless you Anne.) I won't say what it is or post it until Anne has it in her hands. I want her to get the first glimpse ;)
If you haven't been over to see her, please do. She's a wonderful artist herself and a real hoot!
It feels good to be back in the saddle again after having no income for a year. It all starts with a small step, but I feel the gates may open any day now.
Thank you Universe!!
Thank you friends♥
Posted by studio lolo at 4:22 AM 28 comments: 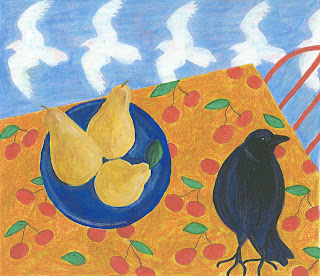 Ravens often visit me.
Sometimes they show up for breakfast.
Other times, they show up in my dreams.
For Illustration Friday's prompt: breakfast.
acrylic and colored pencils on bristol board
Posted by studio lolo at 5:11 AM 17 comments: 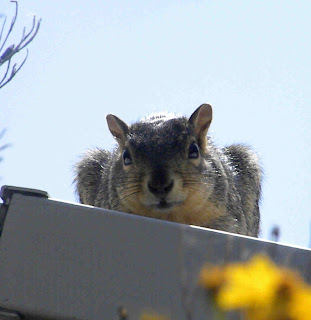 If your home and yard is overrun with these ....
Then you need to bring in the BIG GUNS and get one of these... 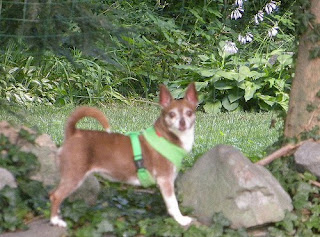 "What?" you ask...a blurry picture of a yappy little dog?
NO!!!!
It's Squirrel Huntress and it's her job to rid every square inch of the earth (her yard) of those adorable (and oh so chasable) rodents with fluffy tails!!
(her mom never, ever lets her catch any.) 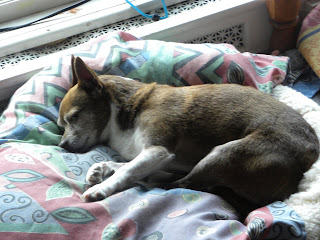 The reward of the chase is a loooong, wonderful nap!
Sweet dreams, sweet Emma ♥
Happy Animal Wednesday to all of our squirrely friends!
Posted by studio lolo at 5:18 PM 25 comments: 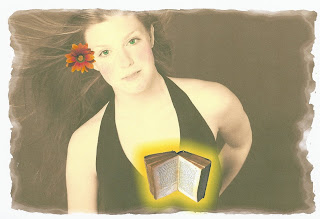 Last weekend we were supposed to go to a concert, but at the last minute we decided to avoid the big crowds and join a friend to watch our very first polo match.
It was delightful!! The atmosphere was so relaxing and the horses and players were spectacular. Here are the two rival teams above. 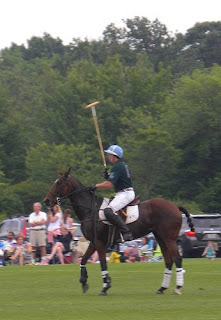 There are 6 periods to a polo match called "chuckers." After each chucker the players change horses because playing 2 chuckers in a row is not allowed as it is too hard on the horses. They all bring their own steeds. Some bring three and play them every other chucker, and some bring 6 and use each horse only once. Imagine the loot it takes to do this! They are so good to these horses.
I was told that these animals go through rigorous training learning to turn on a dime and to not be intimidated by the slashing and swinging of the poles.
Look at what great shape they're all in! 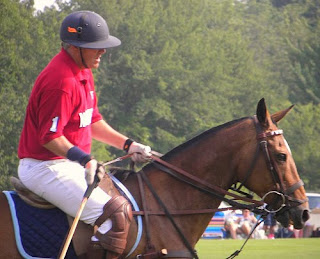 The players are getting ready. Look at this handsome fella. The player ain't bad either! 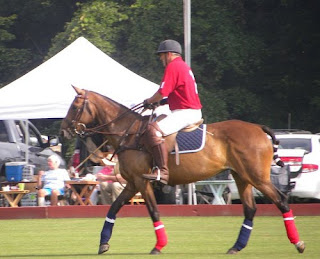 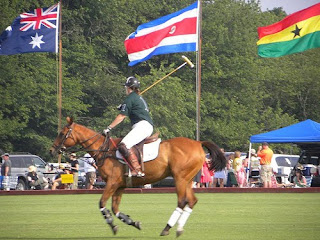 Many countries come here to play. What's interesting is that they obviously can't bring their own horses, so they have to find the time to spend with the horses they'll be using so they can get used to them before a match. That's a huge disadvantage, but as I said, these horses are trained to play the game and all commands are universal.
I hope to be going back this month to see The Netherlands play!! 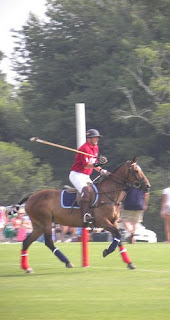 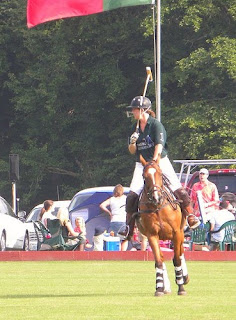 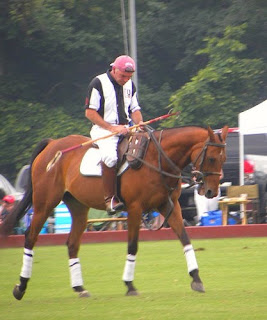 One of the referees. Looks like he's meditating before the game!
I forgot to mention that these matches are coed!! There's one girl there that was awesome. I ended up rooting for her team which meant I was against the home team. Oops!! And my team won ;) 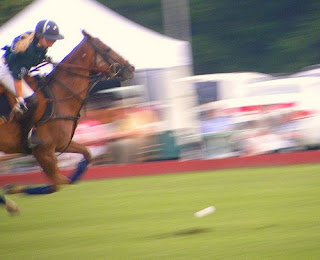 Here she is heading for another goal!! 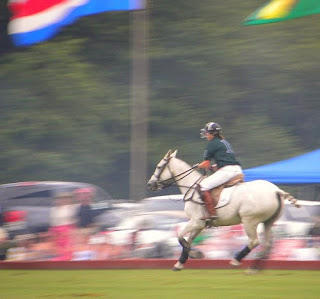 This was one of the fastest horses on the team. They saved the big guns for the finale! 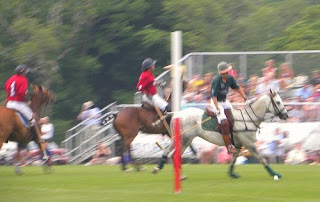 And here's my team making the winning goal!! 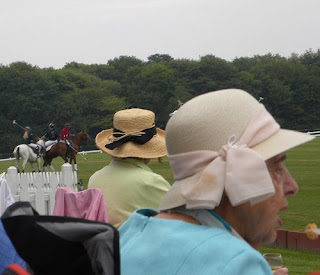 I took this photo for Teri who is into painting hats lately. Click here to see what she did!
These ladies sat next to us. We were all enjoying our wine and munchies as we were treated to a great day of polo.
Thanks for coming along ;)
xoxo
Posted by studio lolo at 5:06 AM 26 comments: 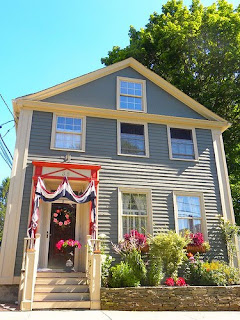 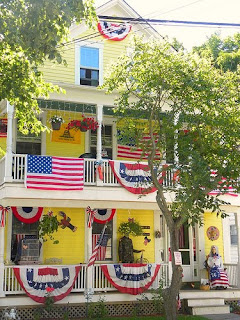 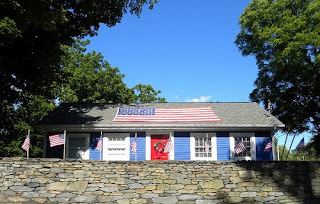 All dressed up
for the
4th!!
Bristol, Rhode island has one of the biggest and most famous 4th of July parades in the nation. It is always featured on news across the country as well as CNN and FOX.
Yesterday my friend and I caught a glimpse of just a few houses that were dressed up along the parade route.
I love the one with "Betsy Ross" and camouflage guy on the porch!!
The top photo is an example of understated, yet lovely touches.
The little blue house has flags all along the wonderful stone wall, a typical New England sighting . There's an art to those walls.
I won't be attending the parade. You have to claim your spots by 4 A.M. or you get shut out! Like you, I'll watch it on the news ;)
Have a safe and happy 4th of July my friends!
xoxo
For more Six Words, click here!
Posted by studio lolo at 5:08 AM 22 comments: 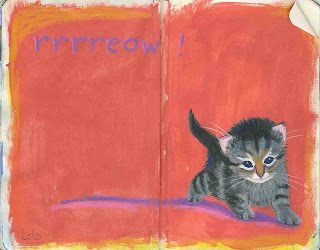 Tiny little runt.
Big, big personality.
GIANT attitude!
Can I keep him? Huh? Can I please???
Done in my moleskine 2 years ago with acrylic paint and colored pencils. Time for an encore, don't you think?
Posted by studio lolo at 7:41 AM 33 comments: