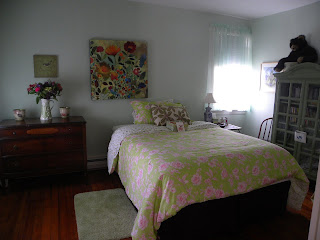 Hello friends! Despite all the rumors, I have not fallen off the planet. I have been without my trusty old PC for five days now and I have no access to images from my laptop. It's times like these I wish I were a geek. Sort of.  Let's not get carried away!
I'm using this post to talk about the wonderful visit from Marianne and her unbelievably Buddah-esque son, Felix. Even my dog was charmed. Not one YIP or NIP or even a bark. That's a first!
Okay, so up top is a picture of my humble room. It's simple but I find solace there.
This is where Marianne and Felix stayed for the few days they were in Rhode Island. 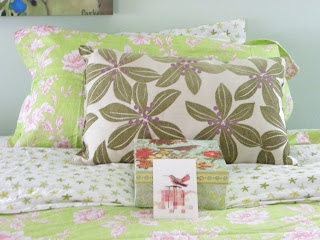 Every guest should be greeted by a welcome note and a box of sweet treats ;) 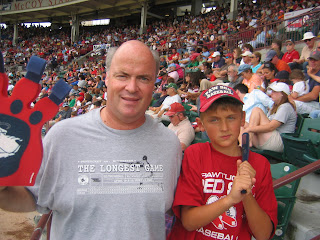 Brian took Felix to his first ever American baseball game!
Felix isn't smiling for the stranger that took this photo, but I can tell you that he said the game was the highlight of his trip!

ooops, kind of a small photo but here you can see the boys "in the home stretch" watching a Red Sox game. Felix even called a homerun before the guy hit the ball!!
He's a real natural already ;)

I borrowed these photos from Marianne. I don't have any way to resize them :(
But here you can see how Felix charmed Emma! She really missed him when he left.
Rumor has it she even sent him a card. 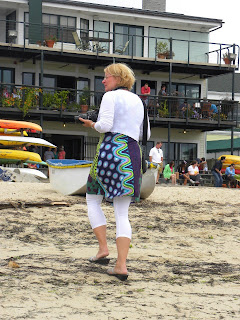 Here's Marianne the day we arrived in Provincetown to see KJ and JB.
Marianne's camera was clicking 100 times per minute!
For some reason I blanked out on taking photographs of her and now I'm kicking myself. 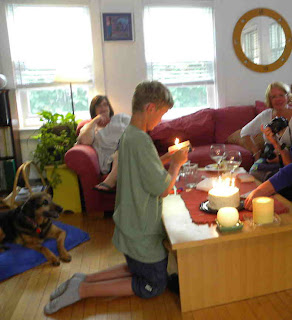 KJ and JB bought a birthday cake for Mim, myself and KJ's belated birthday celebration.
It was some kind of coconut decadence from a famous bakery. I'm not big on desserts but this WAS delicious!! Felix did the honors of lighting the cake.
(The hand on the right belongs to KJ who insisted on being cropped out, the stinker!)
Marianne and Liz, an old friend of KJ's and a new friend of mine are on the couch.
And of course Miss Stella is part of the celebration!
Before the cake we had the most mouth watering, melt-in-your-mouth lobster!!
KJ and JB are always the hostesses with the mostess!

I love this photo of Marianne. The look says it all after such a satisfying day in P-town.

There's a walkway outside of the condo that KJ and JB own. People who live there and folks who visit often leave little mementos and tokens of their time there.
Big-hearted felix bought this beautiful silver token of friendship and had us each hold it to our hearts before he gave it a place of honor.
He said, "We don't say goodbye. We just hug and say friendship."
I'm telling you he's one special kid. ♥

And this is Marianne on our last night together. This was taken in my back yard while we were enjoying a glass of wine and reminiscing about the week.
It was a whirlwind four days with a two-year build up!!
I will treasure my time with her and Felix forever.
♥♥♥♥♥
Stay tuned Thursday to see the birthday gifts she brought! I will also show a few others from my girls in California.
Posted by studio lolo at 6:21 AM 24 comments: 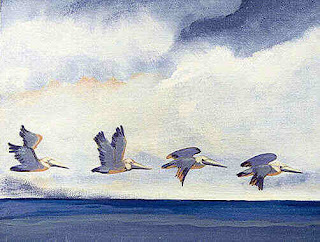 I used to love to sit on a bench by the bay and count pelicans with an elderly couple.
We'd always marvel at the way they'd silently glide by just barely above the water.
The fog is a familiar atmosphere for them as well as the human residents.
Chilly and raw, often slicing you to the bone if it was windy.
Someone once told me that peilicans were pilots who have come back.
I like that. In this life they get to fly free as a bird!
For Robin ♥ and Illustration Friday.
Happy weekend friends!
Posted by studio lolo at 5:19 AM 47 comments: 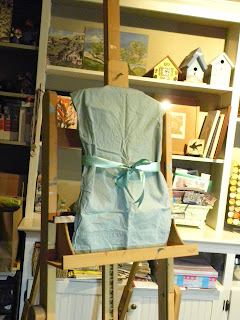 Most of you know that our dear friend Marianne came to visit me all the way from the Netherlands. I still can't believe she was here in my home, my studio!
And most of you know that I have been working on a painting for her for over a year now in exchange for the exquisite birth mandala she painted for me.
I have had such angst over what to paint!  And I have had a few starts and failures.
I knew I wanted to do a portrait of Frida Kahlo for her but I kept trying to make it look like the ones we've already seen painted by herself and other artists.
It never felt "right" to me. And then I knew why.
I was tired of seeing her torment and sadness.
I wanted to paint her in a soft way in my own style.
No thorns holding the signature sparrow around her neck. No scars or blood from the fateful accident that haunted her life and her paintings.
So here I present to Marianne and you, "Young Frida."
Calm, sure, beautiful, feminine and happy at La Casa Azul. 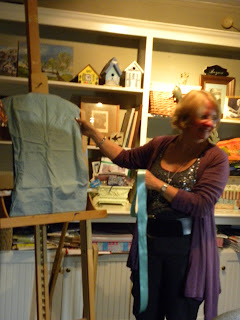 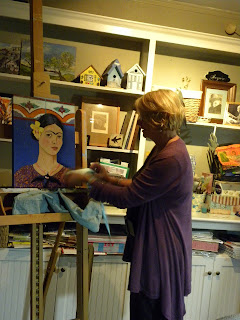 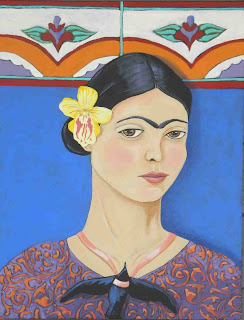 Thank you Marianne, kindrid spirit and sister across the miles.
I will never forget this visit.
♥
The last photo was taken by my other new and dear friend, Felix, Marianne's son. He is as magical as she is!
Posted by studio lolo at 12:11 PM 26 comments: 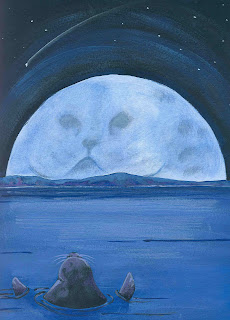 "But what if you leave me too soon?" the little seal asked his mother.
"You'll see me in the moon, little one. You'll see me in the moon."
To me, a shooting star represents someone crossing over to the next realm, the great beyond, something bigger.
This is for all of us who have lost someone we love dearly. When you see a shooting star, speak to them and send them a message. Maybe this was their way of saying hello to you.
This is pulled from my archives as I'm getting ready for an exciting visitor tomorrow, Marianne from Mandalas and More!  I can't believe she's traveling all this way to meet me! Well, she does have other things to see and people to meet like KJ and Mim (hopefully)  so it's NOT really all about me.
We pick her and her son Felix up in Providence tomorrow evening and then we'll come home to chill out and have pizza and wine...and cookies! I know, couldn't I do better?
Then Sunday my husband and Felix will go to a Pawtucket Red Sox baseball game while Marianne and I go for a day trip shopping and having a leisurely lunch to get to know each other. How fun!
Monday bright and early we leave for Provincetown to see KJ and JB and we will spend the night. I know they have a lobster dinner planned and a special coconut cake!
Then Tuesday night we'll head home and maybe, just maybe Mim will come to my house to meet Marianne. Sadly, her MIL is having a health scare right now and that might take Mim to Florida. Our prayers and good thoughts will go with them.
So, lots packed in a few days! You won't hear much from me until after Marianne leaves on Wednesday. Meanwhile, I finally finished her painting that I have been working and reworking for a year now. I'll post it after she sees it, because first and foremost it's a surprise for her!!
Happy weekend everyone. See you soon!
xoxo
Lolo♥
Posted by studio lolo at 3:40 PM 29 comments:

Blooming Tuesday: Words to live by 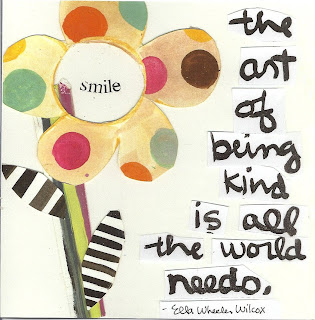 This card lives on my bulletin board in my studio. I firmly believe in the message which is so close to my personal motto:
"Nature is my church, kindness is my religion."
(Card by Koco. Art by Janeen K.....the print is too hard to make out.)
Posted by studio lolo at 5:45 AM 13 comments: 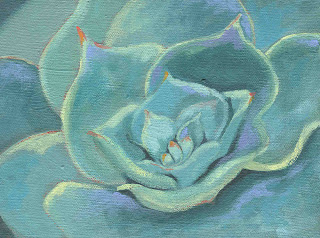 Sundown
My task accomplished and the long day done,
My wages taken, and in my heart
Some late lark singing.
Let me be gathered to the quiet West,
The sundown splendid and serene.
William Ernest Henley (1849-1903) England
The blogging community has lost a bright light, a wonderful artist and nature lover.
I didn't know Judy well except for her sweet comments she left for me, and through her wonderfully painted Cactus Monday posts.
She was a sweet, talented soul who will be missed by her family and friends.
Please visit here to read tributes from other Cactus Monday members and to see why Judy will be missed so much.
Rest now Judy. You'll never be forgotten♥
Posted by studio lolo at 11:12 AM 15 comments: 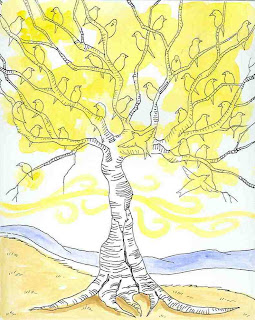 The word over at Illustration Friday is "caged."
I think this is how it should be!
Happy Weekend everyone, and thanks so much for all the birthday wishes ;)
xoxo
(this is a cover for one of my children's stories that hasn't found a publisher...yet!)
Posted by studio lolo at 11:33 AM 30 comments: